Diwali is BIG here in north India, Aha’s homezone 🙂 We wait all year for this season, and enjoy it heartily like the grandest family festival and get-together it is. It also brings back fond memories of childhood, with all the crackers, lights and never-ending fun times with gully-friends!

On the pre-diwali day at Aha, the Diwali mood started setting in almost right after lunch time. Ritu and Deshna got themselves busy with Rangoli and stuff (Deshna is my 10yo Daughter who decided to pitch in for the day; somehow both of them identify quite closely with each other… so one, or maybe both of them is not their age! ) –

The basic Rangoli transformed onward to quite an elaborate affair, as you will shortly appreciate.

Below is an interesting, albeit out-of-sequence picture: we got to buy thirteen silver coins, which was a neat coincidence with Dhan-teras. (For the uninitiated, lord Rama returned to his hometown Ayodhya on the fifteenth day of winning the legendary battle, and the whole town celebrated what was the first Diwali ever. Each of the intermediate days is significant for something. And the thirteenth day is when everyone focusses on money!)… and yes, the number thirteen is not a negative affair here, like it is in the West. Quite the contrary, infact. So people buy new things, buy or gift each-other durables, and worship money in general. This day is called dhan-teras (my attempt to translate: the thirteenth day when we mean money). So the big deal. Anyway here’s a pic (the lady is Kaushal, my s.o., and also who handles admin stuff and 3D printing services at Aha3d):

Soon thereon, the ladies took to doing what they do best:

Meanwhile, I also got swept away with unnecessary ideas, and decided to play the keyboard for everybody to assist with the worship, and began practicing…

me with my notes on the keyboard

…it however turned out to be a failed experiment. Nobody would pace themselves with the music, and just rolled on with rote lyrics and without any sense of tempo or percussion whatsoever like its nobody’s business. It will need group practice before the next time, which I fully intend to get done. Anyway, onwards to the customary Hindu stuff before the event:

And after the pooja, we officially declared the start of Diwali!

It was time to share Diwali gifts with teammates who were there on the day, and with those who weren’t, by gifting stuff to their picture on the wall 😀

…followed by the close of the day, and start of the Vacations with sparklers, firecrackers, and the largest “sootli bombs” that we could find!!!

Looking forward to returning to our beloved work and workplace, after the vacations! Heartiest Diwali wishes to you and your loved ones from the Aha family! 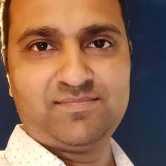